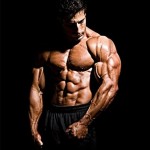 You know that to put on quality size there are no real quick fixes or shortcuts. You must train, eat and supplement wisely – not just for a period of months, but years.

Whatever the reason, the following 5 tricks can help you look 5-10 pounds bigger … instantly.

The easiest and most effective way to put on a few pounds quickly is to carb load. The lower your typical carb intake, the more impressive the results will be.

Those who routinely eat less than one gram of carbs per pound of bodyweight will see the best results from this.

Why It Works: When you consume carbohydrates, they get stored in your muscles as glycogen – a massive amount of glucose molecules attached to each other.

Glycogen pulls large amounts of water into the muscles, filling them up like water balloons.

Do This: A day or two before you want to look your biggest, eat about 4 grams of carbs per pound of bodyweight, or more.

There’s a good chance you’re dehydrated, or at least not maximally hydrated. One study in athletes reported that less than 15% of them were well hydrated.

Why It Works: Adequate water consumption has a pretty simple effect on the muscles: it makes them fuller and bigger.

If you’re not well hydrated, your muscles will likely look flat and it will appear as though you’ve lost size when all you’re really short on is liquids, not muscle.

Do This: Start guzzling water ASAP. Be sure that you’re getting in a minimum of one gallon of water a day, and even up to two gallons, to ensure that your muscles are at their fullest.

We’re not telling you anything new when we say that creatine pulls large amounts of water into the muscles to increase their size in a hurry. But there’s one problem if you grab a container of creatine monohydrate: time.

Instead of monohydrate, go with a fast-acting form of creatine like creatine hydrochloride or Kre-Alkalyn.

Why It Works: These forms will increase muscle cell volume almost instantly for quicker size gains.

Do This: Go with 3-5 g of either creatine hydrochloride or Kre-Alkalyn both before and after workouts.

The popular supplement L-glutamine may not have the immediate effect on muscle growth that creatine and carb-loading do, but it’s still a critical ingredient to include in your mass-gainingstack.

Why It Works: Glutamine is stored in high amounts in muscles and, much as creatine does, it pulls water into the muscle cells.

Research also shows that glutamine helps to convert more glucose into glycogen so that more glycogen can be stored in your muscles, which pulls in more water for even bigger gains in size.

Do This: After workouts, add 10 g of L-glutamine to your post-workout protein shake and carbs.

With agents such as glycogen, creatine, glutamine, taurine, potassium and glycerol stocked up in the muscles (assuming you’re following the aforementioned tips), this greater delivery of water will be quickly pulled into the muscles for maximal swelling.

Do This: Follow dosing instructions on the label and take your NO booster both in the morning and about 30-60 minutes before training.